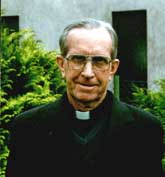 The Society of African Missions lost one of its most outstanding members on the death of Father Kevin Carroll in Ibadan, Nigeria, on January 12th. In the course of his fifty years in Ghana and Nigeria, he became an internationally recognised expert on Africa’s arts, its crafts and culture. He died aged 72 on the eve of the celebration of the golden jubilee of his ordination.

It is appropriate that his life should have come to a close in the second largest purely African city, dominated as it is by Yoruba energy and talent. Kevin died amongst people whose mind and aesthetic he understood and whose language he spoke and wrote with delicacy and perfection. He died too amongst members of the society which had the vision to give his talents the scope they needed.

Kevin Carroll was a native of Liverpool, the eldest of an outstandingly talented family. His interest in African art began in childhood visits to the museum in Liverpool with its fine collection of African carvings. In Ghana where he taught at St. Augustine’s Cape Coast, as well as acquiring the Fante language, he learnt about pattern-weaving from a native Ashanti craftsman and integrated local carvers into the teaching resources. In the past these crafts were often so closely associated with paganism that such initiatives got little encouragement from older missionaries.

This was a period during which Nigerian critical opinion was taking shape. A number of expatriate commentators were voicing somewhat over-heated opinions in response to the fashionable pre-occupation with négritude in the arts as, for example, at the Dakar Festival of Negro Arts of 1966 - not least André Malraux’s quasi-obituary there on African traditional art.

Kevin was keenly aware of these trends of opinion. His own views - and he had read everything - were both positive and down to earth; no lack of sensibility, lots of sense and everything directed towards the perpetuation of a living artistic idiom.

Kevin’s second quarter century made him master of other Nigerian languages - Hausa, Kamberi and Tiv - and led to the publication of his Architectures of Nigeria.

I was privileged to have known Kevin Carroll and to have had the evidence of eyes and ears for the presence in the world of a great stayer and an achiever. The books are there for all to see and one hopes they will be sought out and read. A part of Kevin’s achievement will remain hidden in the hearts of ordinary Nigerian people, animist, Muslim and Christian.

The vast throng attending his funeral Mass and burial in Oke-Are, Ibadan, paid eloquent tribute to a man who spent his entire missionary career in their midst, someone moreover whose scholarship and artistic vision had embellished their lives and made their churches part of a cultural continuum.