The summit of El Naranjo de Bulnes, Picos de Europa. I think the nameof the guy who took the picture is Pete. A few nights before he had told me that he was going to attempt the Navarro-Rabada route, a big,big route. It was his, and my, last few days in the Picos. He was set to do the route with a girl who hadn't decided if she was goingto do it or not. I had said that if she wasn't then I definitely would.We met in a bar to find out who was going and I was disappointed to findout that it wasn't me. A spanish guy joined our group when he heard theroute mentioned and it turned out that he didn't have a partner to do theroute with so we teamed up and walked up to the base of the climb with Peteand his partner. First thing in the morning we walked up to the base of theclimb, it's vast and I was frightened, never doing anything 16 pitches highand at that grade. I looked at my spanish friend who had gone very pale indeed.He thought I was going to lead him and I thought he was going to lead me.It was obvious that we were both going to die if we tried it, neither of us having sufficient experience. Disappointed again, I talked to another groupwho were about to do one of the much easier and shorter routes on the otherside of the mountain. They said 'sure, come with us', my friend went off byhimself and so I got my stuff and went with the new gang. Pete and his partnerset off up the main route. After walking round to the other side with the spanish group and setting up they asked me where my rope was. I hadn't got onedue to some misunderstanding. I was stimied again! I considered soloing the 300 metre climb but thought discretion was the better part of valour. InsteadI decided to go to the highest point I safely could where one could look overdown to the base of the main face. Just as I took a peak, much to my amazementPete and his partner were only 30 feet away. They had an epic on the route, thegirl getting terrified, and had decided to escape off the route. Pete was himselfdisappointed to not get to the summit. He had been leading hard stuff all morningand was quite happy for me to lead, we swapped the camera at the top. It was one ofthe happiest moments of my life!

The final year art show for the 'Visual Art & Design in Context'bit of my course. It was a dog's dinner, partly because of my teachersand partly because of the amount of attention I'd given it, you'll getan idea from the following story...I'm looking rather severe I think you'll agree. You can still see faintblack eyes & a blood stain on my tee-shirt. What happened was this...after a days drinking with Mick Totten & some of his navy friends (!) we went a-drinking some more and he showed us a trick. He lined up an empty beer glass against his forehead and went 'one, two, three' SMASH!He actually threw the glass on 'two' so that it broke on the ground at theright time for 'three' if you see what I mean. Anyway, myself & the chapacross the table from me where pissed enough to think he had really done it.This bloke across the table went ahead and REALLY did it. As far as I was concerned, TWO people had just broken beer glasses against their own headswithout too much harm. As luck would have it (?) I had just finished my beer,took aim, and WHAM! Before the blood blinded me, I saw two jets of blood shootingup and out just above my eyes. The main two arteries where clean severed!Sobering up immediately, I asked someone to follow me outside and get anyglass they could see out, after doing that they pressed hard against the woundto staunch the flow. The ambulance arrived just behind the police car. Dumbpoliceman thought my friend leaning against my head as I leant against the wallwas doing me over, he rugby tackled him off me. The ambulance man proceeded to go mental at him. Amid scenes of general fracas, a kind old nurse lead me away.I had 6 stitches and an uncomfortable night in Otley hospital. While stitching methey asked me 'Did it happen at the show' I thought it best to say 'yes' not reallyknowing what they meant, they didn't find out that it was self inflicted.Next morning they released me, it was raining, my clothes were still ripped andcovered in mud from the mad, drunken rugby we'd played. An old woman heard me comingand glanced over her shoulder. She took fright at this Frankenstein bearing down uponher. She flattened herself against a wall as I trogged passed. Not my finest hour!

The Inevitable Split in concert at the King's HallIlkley '84. What a brilliant time we had.That's Anthony on the bass, he was really good, aswas the drummer Granville. He was a real character,minute and hyperactive with a permanent spot on the end of his nose. Don't know who that is on bongos though!We gigged around Leeds & Bradford area for about 18 months - it was in the style of KidCreole & the Coconuts sort of, brass section includedJane on sax & the amazing drinking man, Alan on trumpetand a geezer I can't remember on something else. Kevin Lesteron lead guitar, he wrote most of the music, and Paul Drew singing,excellent lyrics and very odd dancing. Loved 'em all and hadthe best time...good name too.

After Mrs B's funeral service, Gerb, Steve & Paul wanted to buy me something to say 'thankyou' for being 'MC'. It wasn't easy to think of anything appropriate but at last we hit on the idea of Ch'an robes.

One of the Weedplants street shows. At the Hay-on-Wye circus conventionKim had asked me to join her theatre group. Her partner of the previoustour, Peewee, was 'missing'. She had a tour booked and a director readyto start rehearsals. I agreed and off we went to Cardiff where she lived.That night, with rehearsals to start the next morning, we were partyingaway with her mates, getting ready for the next day when Peewee showed up.Kim hadn't heard from him for months, it turned out he was in prison inSpain for trying to smuggle dope out! He hadn't known when rehearsals weregoing to begin but he did know he had to get back to Blighty damn fast. He was just as amazed at the situation as was everbody else. Pretty soonwe realised that the best way forward was for the Weedplants to become a threesome!

balancing one club on the forehead and juggling three clubs whilst a child shoots me in the groin - again! 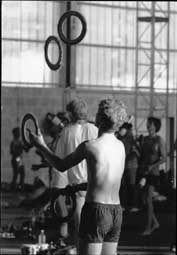 Fancy dress as Nosferatu at the party where I met Sarah